Editing Highlights and Shadows in Adobe Lightroom and Camera Raw

Adobe Photoshop Lightroom and Adobe Camera Raw have two sets of controls for making tone and contrast adjustments: The Basic panel Tone sliders and the Tone Curve. Because the slider names in these two sets of tools are almost the same, some believe that both sets of sliders do the same thing, while others believe the newer Basic Tone sliders are better and there is no longer a need for the Tone Curve. But neither statement is true: The two features can actually give you three different results to choose from.

Let’s look at these differences specifically when editing highlights and shadows. The examples in this article show Lightroom, but everything in this article applies to both Lightroom 5 and Camera Raw 8.

The Tone Curve and its limitations To see more detail in the highlights in one Point Curve move, we could add a point near the high end and drag it down to steepen the curve in that range. This darkens the highlights and adds contrast to them. The problem is that the midtones get a lot darker too, which is a compromise we often don’t want to make. To fix that we’d have to precisely position more points along the curve or layer multiple masked adjustments; understanding how to do that has been a significant barrier for beginners. If we undo that and switch to the parametric Tone sliders and again try to darken the highlights with one move, we can drag down the Highlights slider. We can see that the Highlights slider is designed to keep the adjustment contained at the high end so that it doesn’t darken the rest of the image. But it still exhibits a limitation of the tone curve: When you increase contrast in one tonal range, you must lose contrast in another. This shows up in the water midtones, which have lost definition.

Let’s compare those two results with the Highlights slider in the Basic panel Tone controls. Starting over, let’s lower the Highlights slider all the way. This result seems to be the best of the three: The image maintains brightness and definition throughout the tonal range, and there’s more detail in the highlights. This helps to explain why Adobe puts the Basic Tone controls up front and makes the Tone Curve less prominent. 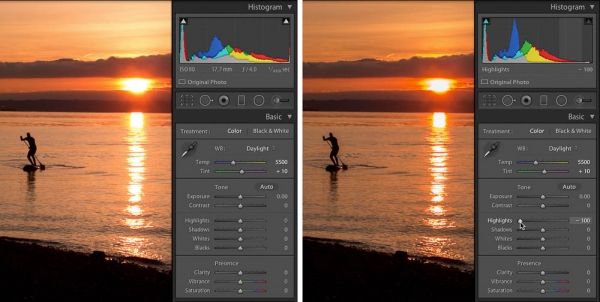 Where does that additional highlight detail come from? It’s easier to see the differences on a simplified gray scale, so I made one with 11 shades (white to black in 10% increments). Let’s compare the original gray scale to the results from the three adjustments we tried. In the gray scale for both Tone Curve examples, when a square gets darker the entire shade darkens equally, as we’d expect. But in the gray scale from the Basic Tone Highlights slider, we see something much different: In the tonal range affected by the slider, each square is not the same shade all the way across. The values actually change across the square! Looking closer, there is a method to this: The value of a shade changes faster as it approaches its border with another shade. What’s going on here, and is it a good thing? We see edges and detail where there is a jump in contrast, so the Basic Tone Highlights slider emphasizes edges by increasing the contrast differences along them. We perceive this edge emphasis as improved retention of detail after an adjustment.

The effects we saw with the Highlights slider in the Basic Tone panel also happen at the other end of the tonal scale when we use the Shadows slider in the same panel: It lightens dark tones while also preserving shadow detail and local contrast more effectively than either type of Tone Curve. The Basic Tone edge contrast enhancements for Shadows, Highlights, and Clarity are engineered to take advantage of the fact that the human eye has evolved to recognize objects and detail by seeking edge contrast. Does this effect make images look too digital? Not necessarily to those experienced in the traditional darkroom where edge enhancement was called acutance, adjusted by changing the mixture and timing of darkroom chemicals. What the Basic Tone sliders do can be seen as a digital interpretation of the edge enhancement techniques in the traditional darkroom.

Is the Point Curve redundant?

Where does all this leave that old warhorse, the Point Curve? It’s been central to conventional digital image editing for a reason: Even though the Point Curve can be hard to master and doesn’t enhance edges like the Basic Tone sliders do, it’s effective at precisely targeting tonal ranges for contrast adjustments. For example, if you’ve done your big moves with the Basic Tone adjustments and want to finish off by adding a bit of snap within specific ranges of tones, you can certainly use the time-honored method of defining Point Curve segments for those ranges and steepening them a bit. With the advancements in the Basic Tone sliders, the Point Curve may no longer be the best first step for adjusting tones. But it could still be the best last step. Even in a diminished role, the good old Point Curve deserves to live.