Insert a Character by Unicode or GID

As you know, you can insert any character from a font by double-clicking it in the Glyphs panel. But that panel can get very tiresome if you have to use it often. For example, what if you often need to type the Rupee symbol? Or the right arrow symbol?

The good news is that there are several clever ways to type a character without having to find it inside the Glyphs panel and double-click it.

If you insert a character once with the Glyphs panel, it will then show up in the Recent Glyphs section of the panel—which makes it much easier to find and insert again. But even easier would be a way to “type” the character with your hands on the keyboard—even if the Glyphs panel is closed. You can do that by assigning a shortcut (using Edit > Keyboard Shortcut) to the Glyph: Insert Most Recent Glyph feature. It’s inside the Product Area called Panel Menus: 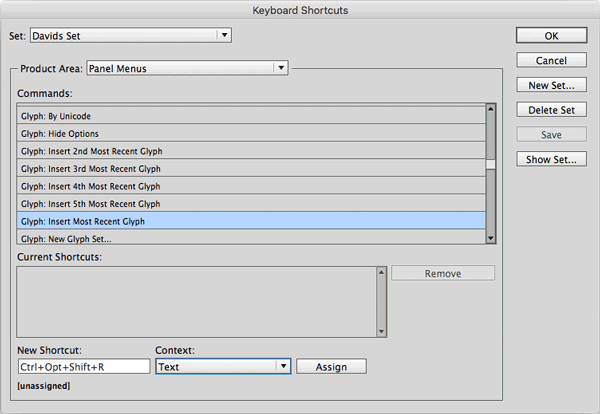 Note that in the image above, I’ve set the Context popup menu to Text; that means this shortcut will only do anything when my text cursor is inside a text frame.

Of course, the biggest problem with this shortcut is that if I insert a character in the Glyphs panel, then that will become the most-recently used glyph. (In other words, the shortcut will start applying the newer glyph.) So here are some more options that ensure your shortcut will always provide you with the character you want.

I started writing a long section about how, if you know the Unicode number for the character you want, you can just type it—for example, Alt-03C0 on the numeric keypad would type a pi symbol. But it works slightly differently in different versions of Windows, and sometimes requires you to make a change to the Registry (eek!)… and on the Mac it requires that you set up and choose a different Input Method in System Preferences… and the whole thing is so clunky and hard to explain that I have now decided to skip it. OK, moving along…

The coolest way to add precisely the character you want is to get a script to do it for you. There are a handful of scripts you can use, and they’re all easy. Before I tell you about the scripts, there are three things you need to know: Giving it a Shortcut

Searching for the right script to run in the Scripts panel is hardly any more efficient than searching for the right character in the Glyphs panel. So why go through all the work to use a script? Because you can apply a keyboard shortcut to a script! (Or run it using the Quick Apply panel.)

To apply a shortcut, choose Edit > Keyboard Shortcuts and choose (or make) your custom Script set. Choose Scripts from the Product Area, and then scroll through the list of scripts until you find the one you want. Select it, click in the New Shortcut field, and type the shortcut you want to assign. I suggest setting the Context menu to Text, so that the shortcut is only triggered when the text cursor is active in a story. And finally click Assign. 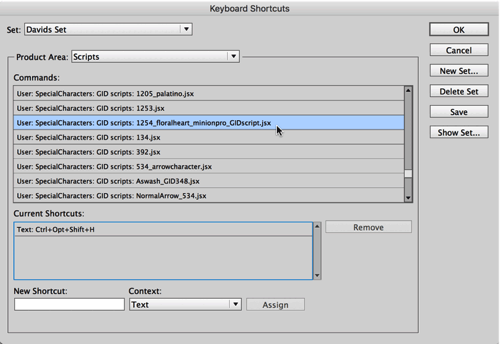 Now, whenever you press that shortcut, the proper glyph will be inserted, depending on whether you used a Unicode or GID script.

How to Keep Lines of a Paragraph Together in InDesign

How to Sync Text and Maintain Different Styling in InDesign

How to Format URLs and Emails Automatically in InDesign