Scanning Around With Gene: Throwing Away the Pasteup Books

I hate to throw away books and do it pretty rarely. But the sheer lack of space in my life has forced me to take a look at my book collection and be brutal – it’s time to weed through the volumes and get rid of those books that are not likely to ever see the light of day again.

I’m keeping various graphic arts books that have to do with design – it’s always interesting to look back at those to get ideas, even if they are dated (remember the “grunge type” movement?). But I decided during this round of purging that several books on graphic arts production simply had to go – the information is no longer relevant and I’m over the nostalgia of it all. But of course I had to thumb through the books one last time and decided to scan some of the images to share with you today. Two of the books, both on pasteup, are featured here. Next week I’ll take a look at the “bible” of the photocomposition era, by John Seybold. All of these books brought back fond memories and a little bit of consternation as well. And of course it’s interesting to note that there was a disagreement, even back then, on whether it was “pasteup” or “paste-up”. Click on any image for a larger version – these books are dated 1987 and 1982. It’s hard for me to believe there are graphic designers out there who didn’t have the joy of experiencing pasteup, but then I’m getting old and have to admit it’s been long enough now that not just one, but perhaps several generations of designers never learned how to mechanically construct pages. It all came together on the light table or drafting board, where elements of the page were adhered to a paper board. Sometimes the adhesive was rubber cement, but more often the elements of a page were run through a waxing machine which applied a coat of thin wax on the back, which could then be positioned and easily moved. Waxers were the source of much frustration as the wax often went anywhere but where it was supposed to, and ended up everywhere, creating a continual sticky mess. Everything had to be cut, measured or rubbed down in those days – each element on the page was a separate entity – so constructing pages was a bit like putting together a jigsaw puzzle. It was best to know where things went long before you started handling them. 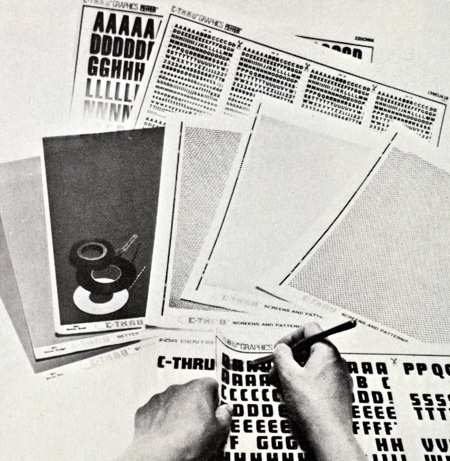 One of the more difficult processes was the cutting of color “overlays” which were done with amber or red-colored film on clear substrate – each color requiring a new layer. Those who take color separation for granted these days have no idea what it meant back then to use spot colors. Even cropping a photo was a mathematical undertaking requiring some geometry skill, or at least a good proportion wheel. All graphic elements had to be enlarged or reduced by a process camera of some sort – so you had to know what exact size to make it before you started constructing the page. Each new shot cost a few bucks, so there wasn’t a lot of room for experimenting. And halftones came in a variety of styles, as shown below in the violinist picture. These days you don’t see many halftone special effects, but they were pretty common back then. 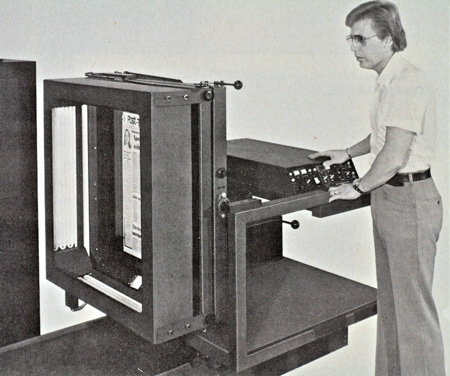 I found this photo of an early digital scanner to be quite interesting – not your average little flatbed we take for common these days. But even line drawings had to be enlarged or reduced mechanically. Perhaps most different than today is the fact that designs had to be well planned out in advance – there was no playing around with different layouts on the screen. You couldn’t order the type to be set or the artwork to be enlarged or reduced if you didn’t have a good idea of what the layout would be in advance. Often someone other than the designer was actually constructing the pages and needed instructions to follow. And at the end of the process there was even more construction – film had to be “stripped” into forms that could then be made into plates for the printing press – mostly these days page files go direct-to-plate without the film step. In one of the books there was an appendix talking about the new field of “electronic” page construction. And there was a photo of the beginning of the end – an early Macintosh. Nothing would be the same after that. There are certainly times when I miss the whole pasteup process – the actual construction part was fun and required a different set of skills than designing does today. But mostly it’s a good thing that we don’t work with knives, wax, and overlays anymore. Less blood from cuts and your hands aren’t all sticky when you go home at night.