Editor’s note: This article summarizes the most important changes in InDesign CC 2014. A more in-depth look at all of the new features will be published in issue 63 of InDesign Magazine.

For the first time in a year, Adobe now has a major new release of InDesign for Creative Cloud subscribers. There are features for everyone, whether you create layouts for print or digital publishing. The focus of the update has returned to the basics, including dealing with long-standing layout issues: there are new ways to work with color swatches, footnotes, and tables. InDesign has added workflow improvements—easier upgrading to a new version, new ways to package files, and a huge number of EPUB enhancements, including the ability to export Fixed Layout files that require very little preparation. And there are several smaller new features as well.

Beginning with this release, Adobe is adopting new branding approach for Adobe Creative Cloud applications. The name of the product, Adobe InDesign CC, stays the same, but a yearly modifier is being added. So the new version just released is called officially “the 2014 release of Adobe InDesign CC.” On your hard drive, the application’s name is “Adobe InDesign CC 2014.” It’s also important to note that this release will co-exist with the earlier version of InDesign, that is, CC 9.2. With a subscription to Creative Cloud, you’ll be able to download the current version, as well as InDesign CC 9.2 and InDesign CS6.

Color swatches in the Swatches panel can now be grouped like Illustrator color groups. When a color group is opened in Name or Small Name view by clicking a disclosure triangle, its swatches are indented under the folder name. Using color groups makes it easy to organize a large number of color swatches (for example, archiving previous swatches used by a publication). The group structure is visible and available in all the places in InDesign where swatch colors can be selected—for example, in paragraph styles or effects.

Many InDesign users have expressed the wish for more flexibility in InDesign’s footnote feature, and this release brings some much-needed enhancements. Now, if there is an inline or anchored object within a footnote, and if there is text wrap applied to it, the text wrap is applied, and the footnote text runs around the object. However, the text wrap will apply only to the text within that footnote. If there is a floating (non-anchored) object on which text wrap is applied, and if that object overlaps footnote text, the wrap will be applied in the footnote.

Footnotes are also no longer limited to rectangular text frames. They will be correctly composed when a text frame has corner effects like rounded corners or even within a shape like an ellipse.

In previous versions of InDesign, moving rows or columns within a table was difficult. But beginning with the 2014 release, you can now drag and drop rows or columns to move or copy them within tables. There are some limitations to this feature: you can’t drag cells outside of a table. Furthermore, the feature won’t work with partially selected rows or columns; a row or column must be totally selected.

Installing a new major version of InDesign can be traumatic because you may have created a variety of preferences and presets in your previous version. In the past, these options had to be painstakingly recreated in the new version. The new Seamless Update feature migrates all the preferences and presets you’ve created in the previous version of InDesign on your local computer. This also includes all the various application-level preferences you can set in panels and dialog boxes.

This feature kicks in automatically the first time you launch the InDesign CC 2014 release. At launch, you’ll see a confirmation the successful migration of your settings.

Packaging with PDF and IDML

The capability of packaging an InDesign file with its assets are enhanced in the 2014 release. Two more options are added and are turned on by default.

By default, the last-used PDF Preset for print is selected, but you can choose any of the PDF Presets in your copy of InDesign, including custom presets you have created. If you choose the EPUB Fixed Layout export option in release 2014, the size and position of all supported objects on the InDesign page are mapped to the Fixed Layout page. The figures below compare the original InDesign layout of a book spread and how that layout is mapped to Fixed Layout EPUB (as displayed in Apple iBooks). No special preparation was required in InDesign. 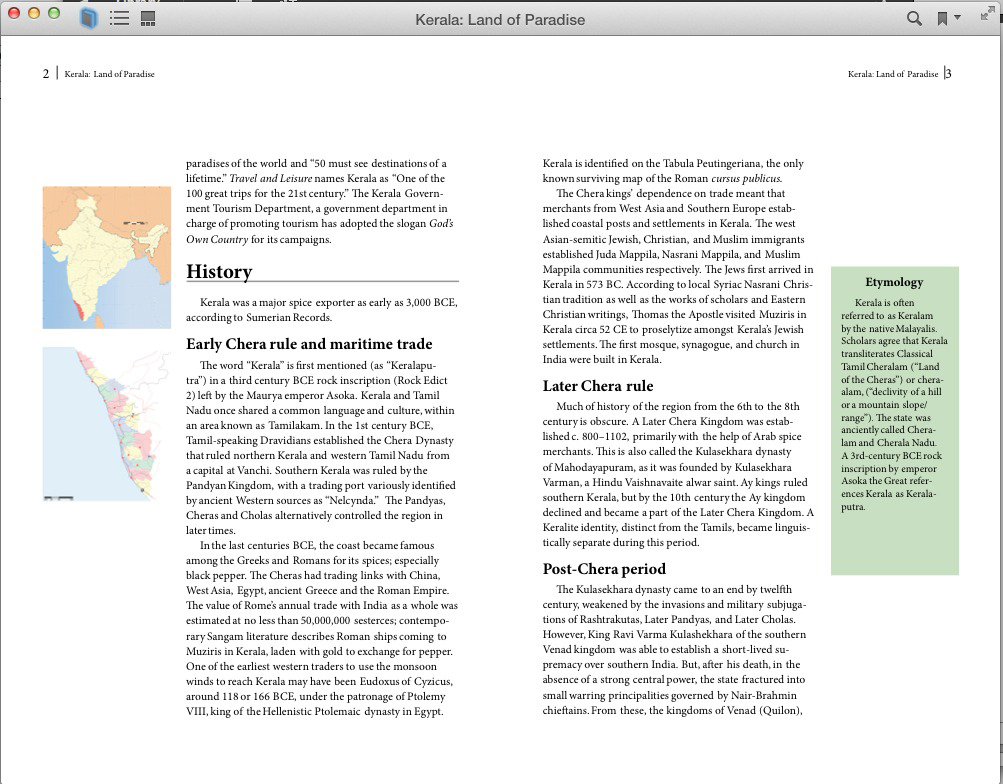 The position and size of all type on a spread, including threaded text, is laid out with HTML text on top. All graphical content, such as paragraph rules and table strokes, is turned into a background image. CSS is generated based on InDesign’s composition, so this process requires that the device/browser compose the type the same way InDesign does. The fonts must be packaged in the EPUB and available to the device. Only OpenType or TrueType fonts can be used for Fixed Layout pages.

There is an option for more fine-grained control over how objects are represented in the EPUB by generating the width and height of the selected object. And here are some other changes that produce better CSS:

There are other smaller improvements throughout the 2014 release of InDesign CC as well.

The 2014 release of InDesign CC should please almost everyone with its wide variety of new features and enhancements.