How to Make a Solid Gold Ring With Photoshop

When a Welsh friend wanted to propose to his girlfriend, he thought it would be a good move to present her with an engagement ring in the form of a Welsh dragon. He’d done a rough sketch; it was up to me to turn this sketch into a reality.

This is the drawing my friend gave me. It’s well worked out, with a perfect circle in the center, and it gave me a good idea of what he wanted. 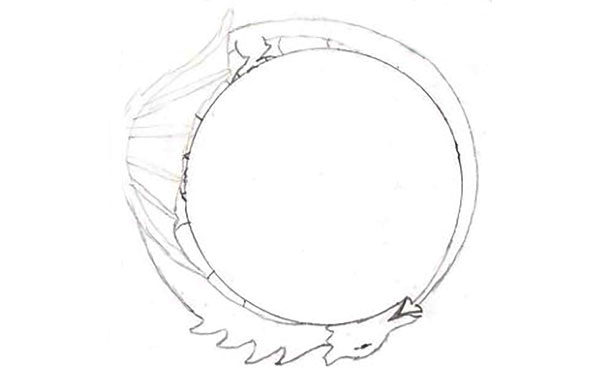 To start the process I made a new layer in Photoshop, and copied the ring design in a solid, flat mid gray. I then chose 3D > New Mesh from Layer > Depth Map to > Two Sided Plane. This turned the ring into a 3D object. I selected the ring and, in the Properties Panel, clicked the button marked Edit Source. By choosing Window > Arrange > Tile All Vertically, I could place the extrusion and the original artwork side by side. (The source artwork is on the left.)

The next step was to add an Inner Bevel to the source artwork, using the Layer Styles dialog. When you make a Depth Map, light areas appear high, dark areas low; so when I saved the source image, the darker areas resulted in a lower profile on the 3D model.

Step 4: Paint the legs and tail

On another new layer in the source image, I painted the wings and the head. Note how a very subtle brighter tone for the ribs, painted on a separate layer, produced a dramatic effect in the 3D model: the key here is to use subtle shades to create the desired result. Again, saving the image updates the changes to the 3D model.

I used the Burn tool to darken the area beneath the ribs, to make them stand out more, and painted a brighter middle with the Dodge tool to make the body appear more rounded.

Painting the scales texture was simply a matter of creating a new layer in the Source image, and painting small irregular dots with a soft-edged brush. You can see how this produced a convincing dragon effect.

Here’s the finished 3D model in Photoshop, rotated to show a different viewpoint. Once my friend was happy with it, I used Photoshop’s 3D printing tools to create a printable file that could then be sent to the 3D print bureau Shapeways for printing.

Here’s the finished ring, printed in solid 18 carat gold. My friend was delighted; his girlfriend was overjoyed. She said yes! How to Create a 3D Pie Chart in Illustrator