The 2014 Adobe MAX conference opens today, and as is their custom, Adobe is using the opportunity to showcase new features in the updated versions of their Creative Cloud apps, which were made available early this morning to Creative Cloud subscribers.

Of interest to all of us InDesign types are two big new features. First, InDesign now has Adobe Color Themes, which replaces and builds upon the now-retired Kuler. They add a fun and easy way to generate swatches based on the color in any object or image in your layout. Second, we can now include animations, buttons, and multi-state objects to our documents and have them work in an exported EPUB (Fixed-Layout) ebook. And yes, they validate, because the interactivity is exported as HTML5 and CSS3, not Flash. (Note: You can still use these features old-school style and export to SWF files if you want.)

Before we cover these in a bit more detail, you should know that InDesign team did not change the file structure of INDD files this time around. You’ll still need InDesign CC 2014 to open files created with this newest “build,” but your existing CC 2014 version of InDesign (a.k.a. version 10) can open these without an issue, and your existing ID CC 2014 files will open as usual (no “Converted” added to the filename) in the updated version of InDesign CC 2014.

Also, you should know that no one is really entirely clear what to call this version. Officially, it’s “The latest updates to the 2014 release of InDesign CC, announced at MAX.” But it’s also version 10.1, and it is also widely (though informally) known as 2014.1.

Many users never even knew that InDesign had a Kuler panel because it was hidden in InDesign’s Window > Extensions submenu. But in 2014.1, it is brought out into the light, and given a new name: Adobe Color Themes. Even better, Adobe has snuck in a new tool called the Color Theme tool: The idea is that it lets you capture color from any object, image, or collection of objects on your page. For example, you can just drag the tool over an area, like a marquee: …and the Color Theme window suddenly appears with the most common colors from the area:

You can then add the colors to your Swatches panel, or load them in to the Adobe Color Themes (aka Kuler) panel, now found in the Window > Color submenu. The panel lets you edit the colors further:

There are a couple of other new color features, too, which we’re pleased about. First, InDesign now displays a “hex color” field for any RGB color: And, even better: See that little eyedropper icon to the right of the hex field? If you click that and move the cursor around (while the mouse button is still held down), it will pick up the color from anywhere on your screen (even other applications in the background).

First introduced in the initial InDesign CC 2014 back in June, fixed-layout EPUBs were a revelation. With very little prep needed to your layout, you could export an eBook that looked just like a PDF exported from the same file. Unlike PDFs, though, you could sell them in any ebook store that supported this special subset of the EPUB 3 standard, including the Apple iBookstore, GooglePlay, and the Kobo store. The fixed-layout format is just the ticket when you need an ebook that replicates a design-heavy layout precisely, such as children’s books, photo portfolios, diagram-heavy reference and how-to books, cookbooks, textbooks, and more.

In this October 2014 release, Adobe is doubling down on the future of EPUB 3 and the fixed-layout format by allowing designers to add interactivity to their layouts. The EPUB 3 format supports interactivity that can be produced by HTML 5, CSS 3, and Javascript; and those wizard InDesign engineers have figured out how to get the program to export interactivity using those mark-up languages. (Yes, InDesign even writes the Javascript!) 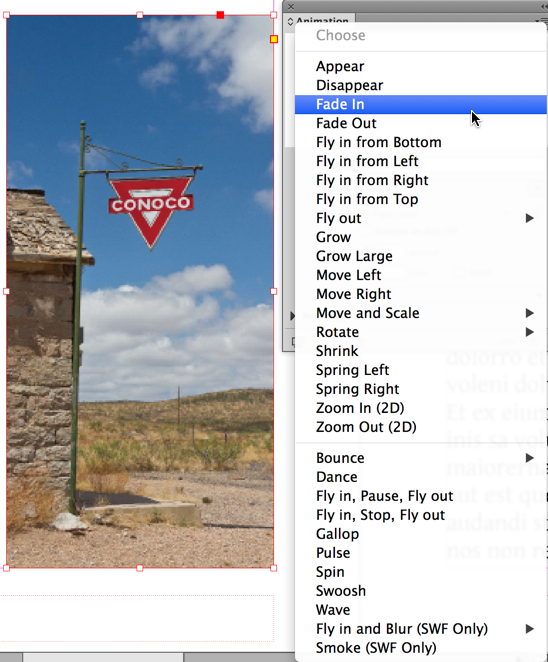 Except for forms and a couple Animation presets, all of the interactive features first introduced in CS4 and CS5 for SWF layouts can now be employed in a fixed-layout EPUB (often called FXL):

Plus, another new EPUB feature: the EPUB Interactivity Preview panel, which lets you get a glimpse of your FXL: We’ll be covering these features in more details in the weeks to come (and in the next issue of InDesign Magazine). Also, Anne-Marie’s new course on lynda.com, Creating Fixed-Layout EPUBs from InDesign CC 2014, should be out in the next couple of weeks.

Last but not… well, actually, yes, least… Adobe has also beefed up the What’s New dialog box a bit. Our favorite part is that it now shows the new features in chronological order, so you can easily see which features are newer than others. So 2014.1… or late-2014-release… or whatever, you want to call it, the name is not catchy, but we think the fixed layout (FXL) stuff is awesome. It’s not hyperbole to say that it may even change the landscape of publishing. That said, we are (of course!) always hoping for more in 2015, especially in the areas of long document publishing (footnotes? tables? indexing improvements?), inter-application support (export to PSD? image sharpening at export time? save for Web?), and just general usability (numeric input for Gap tool? HTML import? apply color to single-color vector artwork?). We have a wish-list a mile long!

But today is not a day to gripe, it’s a day to celebrate that Adobe has dropped a bunch of goodies on us. Start playing with them and let us know what you think!

InDesign How-To: Get Quick Access to Panels and Options

How to Create a Color Group with Object Mosaic in Illustrator