Yes, InDesign’s Radial Gradients are Insane (it’s not you)

InDesign’s Gradient feature has bothered me for over a long time and I finally figured out part of the problem!

I don’t make a lot of radial gradients (or blends or vignettes or whatever you want to call them)—you know, oval or circular blends. But when I do, I’m often stymied by getting them right.

The problem comes down to the shape of your object when you first apply the radial gradient:

If this is not a bug, then it was designed by sadists.

Here are some examples to illustrate the problem: I selected all four of frames above and applied the same radial gradient in the Gradient panel at the same time. In my humble opinion, all four gradients should look exactly the same, but they obviously don’t. Not even close.

[Okay, here’s my crackpot theory: The “squishity” of the oval (that’s the technical term, I think… some people call it eccentricity) is linked to the slope of the hypotenuse of the frame… so a slope over 1 equals a higher squishity value.]

Meanwhile, you can try to use the Gradient Swatch tool to adjust the gradient in the frame, but if the radial is already squished then it’s too late. You can’t even create a square or wide frame, apply the gradient, and then resize it. The only solutions (if you want a circular blend in a tall frame) appear to be the following: 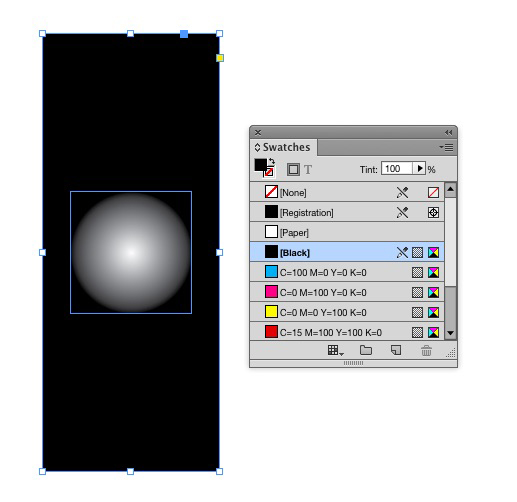 The Riddle of the Ring Contest Answer and Winner

Tip of the Week: Color Shortcuts