Which Size Graphics Tablet Should You Buy? 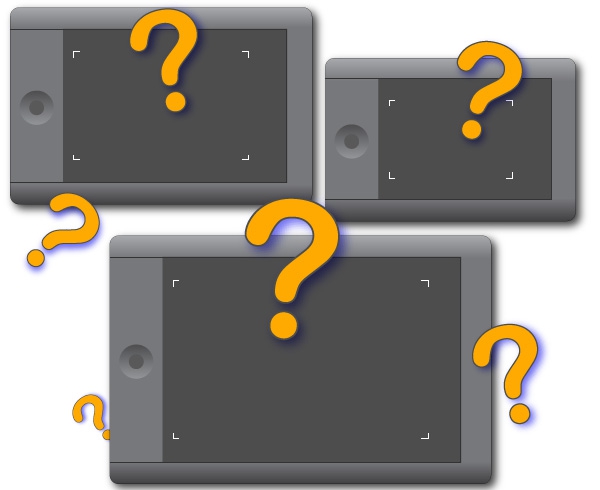 A graphics tablet with a pressure-sensitive stylus is an essential purchase for many creative professionals. Once you decide to buy one, a big question is which size you should get: Small, medium, or large? The answer is not always what you might think.

I’ll talk about graphics tablets that replace your mouse or trackpad, not the pen displays that let you draw directly on the screen or standalone tablets such as the Apple iPad. Graphics tablets need a closer look because the size relationship between a graphics tablet and the screen is less direct, but affects how you work.

Moving around the screen

You move around the screen differently with a graphics tablet than you do with a mouse or trackpad. A mouse uses relative positioning, and a graphics tablet uses absolute positioning. What does that mean? With a mouse or trackpad, when you move the pointer it starts where you last released the mouse or lifted your finger off the trackpad. In other words, it moves relative to its last position. With a stylus, when you move the pointer it starts from the absolute coordinates on the tablet that correspond to the display, so if you position the stylus at the top right corner of the tablet’s active area, the pointer instantly moves to the top right corner of the screen no matter where you last left it. You’ll often be moving across the entire surface of a tablet just to move the pointer around the display, so with a large tablet your hand may travel much farther than it would with a mouse or trackpad.

Keep in mind that the active area of a tablet is typically smaller than the area that appears to be the drawing surface. For example, on Wacom Intuos Pro tablets you’ll find four light corner marks that indicate the active area of the dark tablet surface.

Controlling a big screen with a small tablet

If you’re new to graphics tablets you might wonder if a bigger display needs a bigger tablet, but most graphics tablets have a much higher resolution than your display. Computer displays typically don’t exceed 3000 lines of resolution across their entire width or height, but Wacom says their Intuos Pro tablets have a resolution of 5080 lines in just one inch. So, at least in terms of the hardware, even a small tablet has more than enough resolution to control every pixel on a typical 27-inch diagonal display (2560 by 1440 pixels). A tablet of any size can map its active area to control all of a large display.

Working with a large graphics tablet

But the large size comes at a price, and it isn’t just that the Intuos Pro Large costs almost twice as much as the Small size. Large tablets are a lot bigger than a mousepad, so you have to clear off a lot of desk space to make room for one. The large Wacom Intuos Pro tablet is 19.2 inches by 12.5 inches. A tablet can end up competing with your keyboard for desk space, especially if your keyboard has a numeric keypad. If you’ll be using a large graphics tablet constantly, you might decide to move your keyboard to an under-desk keyboard tray.

Working with a small graphics tablet

While digital painting and other art involving arm-sized gestures is usually best done with a large tablet, a small tablet is often more than sufficient for layout or when most of your graphics editing involves control points, transformation handles, and filters. For the times when you want to work with more precision, you can simply zoom into the document.

Working with a medium graphics tablet

Although a small graphics tablet may have more than enough resolution to precisely control the pointer on displays of many sizes, that doesn’t mean it’s just as easy for a human to position the pointer. As the tablet size goes down and display size goes up, you may find it harder to control the pointer precisely because you have to make tinier moves with your hand. If you want to more easily control precise pointer moves but the large tablet size is just too much for your arm and your available desk space, that’s when you want to look at the medium tablet size. While the medium size Wacom Intuos Pro tablet is still portable, it’s longer and wider than a MacBook Pro so it won’t travel quite as easily as the small tablet size. But if it’s going to live out its life on your desk, that’s not a problem.

Tailoring a tablet of any size

The software that comes with Wacom tablets lets you assign how the tablet’s active area maps to your display. For example, if you need the big active area of the large tablet for your artwork but it’s too large for when you’re using the computer for web browsing and general office tasks, you can use the Wacom software to map only a few square inches of the tablet to your entire display. If you have multiple displays you can tell the tablet to control just one display, which should make precise edits easier. When you’d rather have the stylus behave more like a mouse or trackpad, you can set the tablet to relative positioning instead of absolute.

Graphics tablets often have shortcut buttons (called ExpressKeys by Wacom), pop-up menus, or features like the Wacom Touch Ring that help you scroll or change settings like opacity without having to reach for the keyboard. You can customize what those features do in the Wacom tablet software. If you like using them, an advantage of the medium and large tablet sizes is that they have more ExpressKeys.

A good approach for making your tablet size decision would be to start from the medium size. Go smaller if you need the portability or are short on desk space or budget, or go larger if you’ll frequently be using large arm gestures to create digital drawings or paintings, tracing whole sheets of artwork, or want additional shortcut keys on the tablet.

Get the Most Out of Your Next Laptop