I’ve been dealing with two different problems with the split columns feature recently. I love the split and span columns features, but in both these cases, the feature was driving me to distraction because I could not figure out why text I selected would not split.

Problem in the Style Definition

The first instance was sent to me by a reader, Samuel, who had selected a bulleted list in the middle of a story and applied a paragraph style. The text didn’t split. Nothing he did could make the text split into two columns. When I tried it, I was also stymied? until I opened the Keep dialog box (Keep Options, Command-Option-K/Ctrl-Alt-K). The problem? The Keep with Previous checkbox was enabled.

It turns out that if all the paragraphs have Keep with Previous or Keep with Next turned on, splitting fails. It does kind of make sense, because if you want the paragraph to keep in the same column with the next (or previous) paragraph, then InDesign can’t really split it up into two or more columns — even if those “columns” are split within the single column.

Personally, I wish keep options would understand that if it’s a “split column” inside a single column, then it should let it. But then other times I might not want it to, so… well, it’s a quandry.

Problem in the Position

The second problem I encountered was even more confusing. I’m just going to cut to the chase: My bulleted list was at the end of the story: 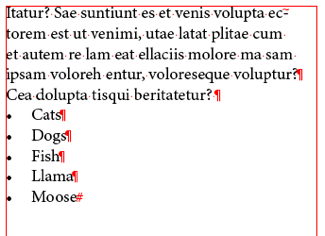 The final paragraph doesn’t actually need to have any text on it, but you do need a paragraph there. I asked the engineer at Adobe who actually wrote this feature about this limitation and he raised his eyebrows and replied, “Really?” So perhaps it’s a bug that will get fixed someday. But in the meantime, I hope it’s helpful to know why your split columns may not be splitting.