Adobe has settled into a “new normal” pattern in the development of InDesign. As with most of its other Creative Cloud applications, there is a big release with a lot of new features in the fall in connection with Adobe MAX, and a smaller update in the spring which includes a few new features and bug fixes. The March 12 release of InDesign CC 2018.1 is one of those small updates. It includes three principal feature enhancements, some small tweaks, and lots of bug fixes.

Enhancements to Endnotes and Paragraph Borders

Two major features from the October 2017 release of InDesign CC 2018 left many things unfinished. In this release, there are enhancements to begin to fill out those features:

Endnotes Support in InCopy and Other Fixes. Apparently, there wasn’t time in the original release of the Endnotes feature to include InDesign’s partner, InCopy. This support and other fixes are now added to the InDesign CC and InCopy CC 2018.1 releases.

Merge Paragraph Borders and Shading When Same Settings. In the original release of the Paragraph Borders feature in InDesign CC 2018, a major deficiency was that it was difficult to create borders or shading for multiple consecutive paragraphs. It’s been a long-standing request that when exporting a PDF file from InDesign, you should be able to export individual PDF files of each page or spread, rather than creating one PDF of all the selected pages.

This is now an option with the CC 2018.1 update. When you choose File > Export > Adobe PDF (Print), after selecting a page range and Pages or Spreads, you can check “Create Separate PDF Files”. The name of each PDF file begins with the filename. You can choose a suffix from a menu—including Incremental Numbers, Page Numbers and Page Size. After making a choice, pausing over the field to the right of the menu previews the name of the first PDF file. Figure 2: You can now export single pages or spreads as PDF with a choice of naming the files.

As you might expect, the “View PDF After Exporting” option is not available when the Create Separate PDF Files is chosen.

By default, the Suffix field is initially populated with _^P—an underscore as a separator and a metacharacter ^P for Page Number. The other choices are the metacharacter ^# for Incremental Number and ^S for Page Size.

Here’s an example of how the PDF files will be named using the three options. The document page size is 8 × 10 inches, and you’re exporting pages 2–3 and 6–7 as spreads:

A folder with the name of the original InDesign file encloses the produced PDF files.

The Preview Checkbox Returns to the File > New Dialog. In the older “legacy” New Document dialog, there is a Preview checkbox, so you can preview the appearance of the selected settings in a new document.

Updated Mobile Presets for the File > New Dialog. In both the “legacy” and newer New Document dialog boxes, when a Mobile intent is selected, there is a updated array of device sizes for contemporary mobile devices from Apple, Samsung, Microsoft, Google and other manufacturers. These include the iPhone X, Google Pixel, and more.

New Keyboard Shortcut Presets for Illustrator and Photoshop. When you create or edit keyboard shortcuts in Edit > Keyboard Shortcuts, previously you have had a choice of using the Default set, creating a New Set, or using two ancient presets for QuarkXPress 4.0 and PageMaker 7.0.

In this release, there are new presets for users of Adobe Illustrator and Adobe Photoshop which better match the shortcuts of those two applications If you have those applications installed on your system, you’ll see a message offering those options but it’s available for anyone. 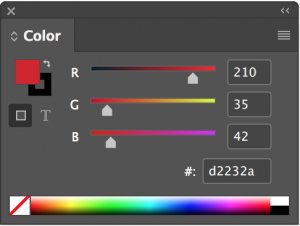 Figure 4: An input field for Hex is added to the Color Panel when RGB is selected.

Cross-Reference Paragraph Search Field. When creating a cross-reference based on paragraph styles, you first need to select a paragraph style and then find a particular paragraph to which that style is applied. That can be difficult if the list is long. Figure 5: A search field is added to the Cross-References panel.

An IDML File Retains the Document Name When Opened. Until the CC 2018.1 release, when you export an IDML file from an InDesign and reopen it, it reopens as an untitled document. This is confusing, especially if you’re working with multiple files. Now, the IDML file opens with the name of the original document from which it was created.

Object Scaling Which Better Matches Adobe Illustrator. There has been a request that InDesign better match Illustrator’s object scaling when the settings “Adjust Stroke Weight When Scaling” is turned off. This setting is found on the Transform panel’s panel menu. Most people find this change more intuitive and obvious than that of previous InDesign versions.

Theoretically, this feature will only appear if an InDesign user (not Enterprise) indicated on installation that they were a beginner for InDesign, Illustrator, or Photoshop. However, I’m far from a beginner, and it appeared in my version as well. When collapsed it appears as a light bulb widget on the Application Bar. Figure 6: Beginning users in the USA can click on the light bulb widget to open the Learn panel making available tutorials about InDesign.

The InDesign team has been working very hard on fixing bugs—especially those causing crashing and hanging with the InDesign application. But they have fixed many more bugs in all areas of the program. I saw a list which included 62 important bug fixes for this version.

After you install the update, try out InDesign to see if your favorite bug has been squashed. And if it’s not, go to https://indesign.uservoice.com and make a case why your bug should be fixed in the next version of InDesign. Adobe takes those bug reports seriously.

This Month in InDesign Articles, November 2018