I recently ran down the top fifteen differences between PowerPoint on the Mac vs. the PC—more specifically, the things you cannot do on the Mac that you can on the PC. But believe it or not, there are actually a few advantages that the Mac has over its Windows counterpart.

Admittedly, this won’t be quite as long an article as the previous one, but let’s do our top five, counting down from least to most awesome!

Whenever you select an image on a slide, you will see “Animate as Background” as an option on the far right of the Picture Format tab. Clicking this will bring up a window with that image and instructions to “Click on what’s important to guide the animation path.” Select as many points as you like on the image and click Apply.

What happens next is that PowerPoint fits the image to full-screen and applies a series of slow and subtle animations that pan and zoom your image to feature the parts of that image in the order you just selected. Again, think of Ken Burns slowly moving one of those Civil War images around the screen, and you get the idea. The animations are typical motion paths and grow/shrinks that you could have created manually, but the feature will save you loads of time if this is the effect you’re after. You can, if need be, edit the animations as you would any others. 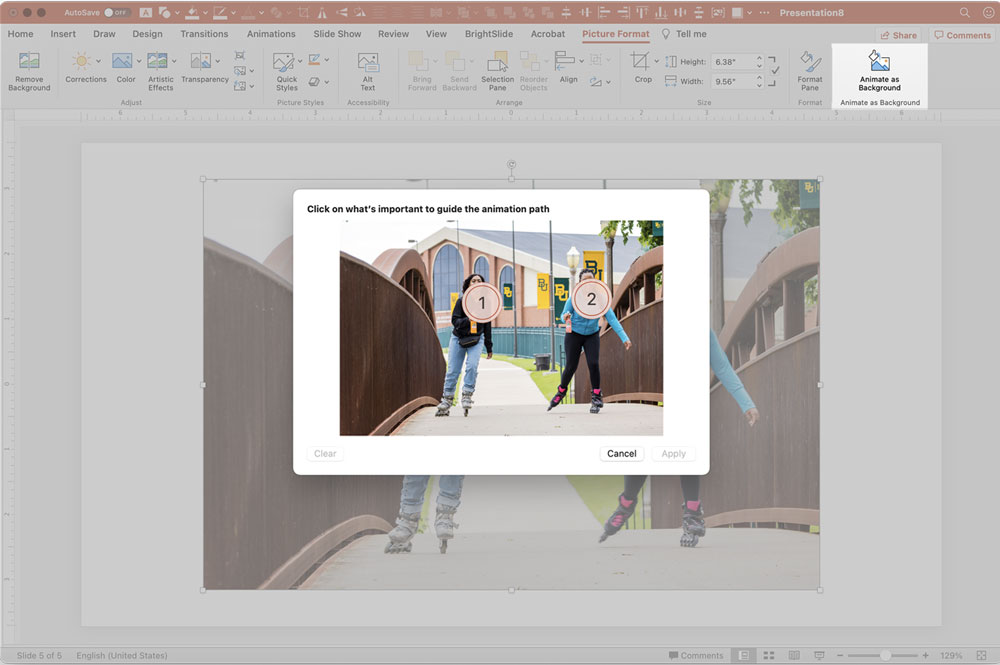 I have used the feature when creating image-only slideshows to give things a bit of movement and depth, but you could easily use it to give graphic backgrounds just a little something extra under text.

Under Apple System Preferences, go to Keyboard, then Shortcuts and finally App Shortcuts. Here you’ll be able to add PowerPoint as an application and then enter any File Menu item (you need to spell it exactly as it appears in PowerPoint), and then enter a keyboard shortcut. And that’s it! If a shortcut already exists in PowerPoint, whatever you entered will override the default, and you’ll see your new shortcut listed in the File menu. I have a dozen or so custom shortcuts, but by far the most useful are the align and distribute tools that have no shortcuts at all in PowerPoint on the Mac or the PC despite being some of the most often used tools. With these custom shortcuts enabled, I can align and distribute items in fractions of a second just by using the keyboard. I also like to make my shortcuts consistent across programs. For example, I have set F5 as Export in PowerPoint and just about every other program that has an Export function.

As always, let me know if I missed anything that you’ve found works only on the Mac when it comes to PowerPoint.

If you are looking to further develop your PowerPoint and presentation design skills, you need to join us at CreativePro Week, May 9–13 in Washington, D.C. (and online). CreativePro Week features over 40 of the industry’s top experts — including Design + PowerPoint Summit speakers Jole Simmons, Stephy Hogan, Nolan Haims, Mark Heaps, and Mike Parkinson — to help you master PowerPoint, InDesign, Photoshop, Illustrator, Acrobat, and more. In addition to over 100 HOW-TO sessions, you’ll also have on-demand access to the event, sessions, and all resources for a full year (for the days you sign up for). Members get a special discount on registration! Sign up today.   LEARN MORE AND REGISTER NOW

Advice on Building Your Own Custom Graphic Design PC

Is Mac or PC Better for Graphic Designers?

Nolan Haims
Nolan Haims has more than 20 years experience in the field of visual communications. Haims helps organizations and individuals show up differently and tell better stories with fewer words. Learn more at his website, nolanhaimscreative.com.