Today’s OpenType fonts provide designers with a broad range of options never before available in one font. One extremely useful, but often overlooked feature of some OpenType fonts is the availability of more than one style of numeral, which can provide practical and sophisticated options for setting dates and years, quantities, prices, measurements, and a lot more.

There are two design styles of figures: lining, also referred to as aligning, modern, or cap figures; and old style, also called lowercase, ranging, or text figures. Lining figures are all the same height, and align on the baseline and (most commonly) the cap height, thus the name aligning. Old style figures approximate lowercase characters in that they have an x-height as well as fixed-arrangement ascenders and descenders.

Lining figures (upper) are all the same height (with slight variations),
while old style figures (lower) have an x-height, ascenders and descenders.

Old style figures can vary in design, width, and proportion when compared to their corresponding
lining figures, as can be seen in these settings of Scala Pro and Metro Nova Pro.

Lining figures are great for use within all cap settings, such as headlines, as well as for vertically-aligned numbers, where their uniformity creates a pleasing appearance. Old style figures, on the other hand, look great when used within running text, as their ascenders and descenders allow them to blend in with the text, rather than stand out, as lining figures would.

The other differentiating characteristic of figures is their spacing, which comes in two varieties: tabular and proportional. Tabular figures are those which all have the same horizontal space, which is the total of the width of the numeral itself plus the space on both sides. Tabular spacing allows numerals to align vertically in tables (thus the term tabular), such as annual reports, price lists, financial statements, invoices, and other columns of figures.

Proportionally-spaced figures, on the other hand, have varying, or proportional total widths so their spacing looks even and balanced. Proportional figures are the preferred style of spacing for headlines, subheads, running copy, and any instance that does not require them to be vertically aligned; they should not be used for tables and listings since they won’t align in vertical columns.

Tabular figures (upper) all have the same width so they align vertically.
Proportionally-spaced figures (lower) have varying widths so they have more even, balanced spacing. When aligning figures, be sure to select a font with tabular figures (right)
so they line up vertically, as opposed to proportional figures (left), which won’t. Running text with numerals looks great when set with old style figures, which blend in nicely with the lowercase letters.

While tabular lining figures have been the most commonly available figure style in text typefaces (and usually the default in fonts that have more than one style) explore all available figure styles in the font you are using and select the one most appropriate for each usage. You can even use more than one in a project, such as proportional old style in running text, and tabular lining for a price list below it.

Here’s how to access and select figure styles in Adobe InDesign: Adobe InDesign’s figure options are located at the bottom of the OpenType panel. When an option is unbracketed, it is available in the font in question.

Bonus tip: You can also apply figure styles in InDesign with QuickApply. Just press Command+Return/Ctrl+Enter and start typing the name of the figure style you wish to apply. When it’s highlighted in the dialog box, press Enter or Return. 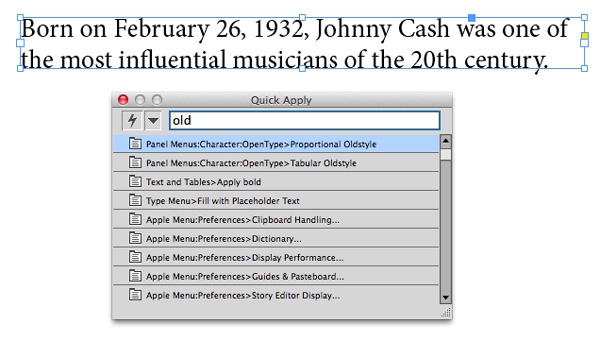 Note that you can also access and designate figure styles in both Character and Paragraph
Styles.

Most current software that supports OpenType will have a way to access available figure styles, so explore carefully to take full advantage of this important and useful feature.