The most advanced graphing tool available inside Illustrator CC

What tools do you use for creating charts and graphs? Most creators of data-driven graphics are unlikely to answer “Adobe Illustrator.” Though Illustrator has long had a graph tool, its capabilities are quite limited.

Datylon’s competition is not Illustrator, though. Creators who are given raw data in a spreadsheet have many options for graphing it, all of which provide more capability than Adobe does. The 800-pound gorilla in this space is Microsoft Excel, whose built-in graphing capabilities are extensive.

Datylon Graph offers just as much control over graphs as Excel plus some unique features of its own. As a graphing application, it’s impressive. As an Illustrator add-on, it is also at times quite frustrating. I’ll explain this further as I jump into the details of the review. Datylon Graph version R38.2 was tested in the Mac version of Illustrator CC 2020 (24.1.2) on a 5K iMac running Mac OS Catalina (10.15.4).

Downloading and installing Datylon Graph for Illustrator requires registration at https://insights.datylon.com/auth/join. A 14-day trial is provided. To keep using the tool after the trial period, a subscription is required. (Note: Datylon extended the trial period for me, as I needed more time for this review). As of this writing the cost of a Datylon Insights subscription is €7.50 per month when pre-paid for a year, for a total of €90 (about $100 U.S.). The subscription includes use of the plugin and access to Datylon’s growing library of pre-made graphs that can be downloaded, edited and used as templates in Illustrator.

Setup is straightforward. After installation a new tool appears in the toolbar when you next launch Illustrator:

To create a graph, select the tool then click-and-drag out a rectangle on your artboard to launch the plugin panel. Logging in with your previously set Datylon credentials is required to proceed.

The login step failed for me on several occasions with an error message. Restarting Illustrator solved the problem, without being prompted again to login.

The Datylon interface is a large two-paned plugin panel. This panel is larger than any other in Illustrator and took up a much of my 5k screen. Here’s what it looks like when starting a new graph: Figure 3. The Datylon Graph Plugin Panel takes up much of the right side of the screen.

The panel can be resized but not by much, scrollbars will appear, and content will disappear off the edges. Twelve chart types are available, plus a custom option that requires contacting Datylon. The Bar Chart is selected by default. Double-click a chart type to view its data on the left and chart formatting options on the right. I appreciated that there is default sample data provided for each chart type. 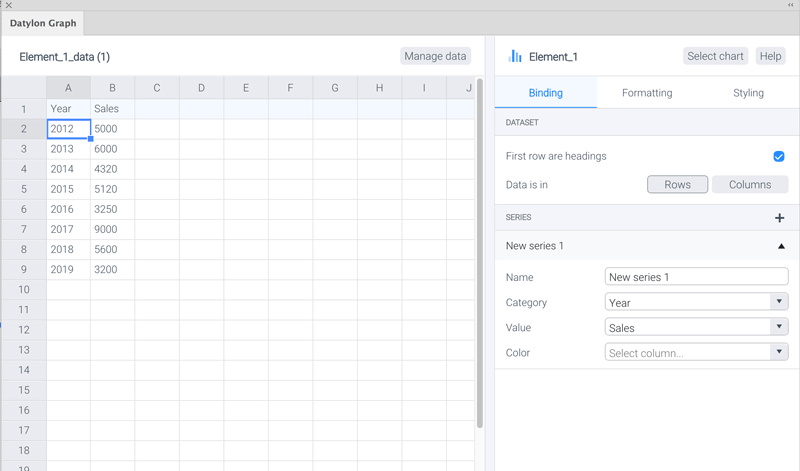 Figure 4. The Datylon panel shows data on the left, and chart formatting options on the right.

With the Manage Data button (top of Figure 4), Data can be imported into Datylon Graph in several file formats including Excel, a capability Illustrator still lacks natively. Datylon will recognize all sheets in an imported Excel workbook. Datylon cannot interpret some formatted data from Excel. For example, Excel understands “60%” as 0.6. Datylon does not and will flag numbers with a percentage symbol as erroneous when it expects numerical data in that place on a sheet. I had to fix these issues manually by re-entering the data. Datylon treats a % symbol as a suffix that can be added later, so 60% is entered as just “60.”

As I started using the plugin, I noticed immediately that almost none of Illustrator’s built-in tools work on a Datylon graph. A selected graph is identified by Illustrator as a “Plug-in Object” in the Control Bar. Other than moving and resizing, all other actions result in an error stating “not supported in this plugin version:” To edit a graph and customize its appearance, there are numerous element-level controls. Every part of a graph can be customized in the panel’s Styling tab. Using a bar chart as an example, there are styling options for 9 major elements: 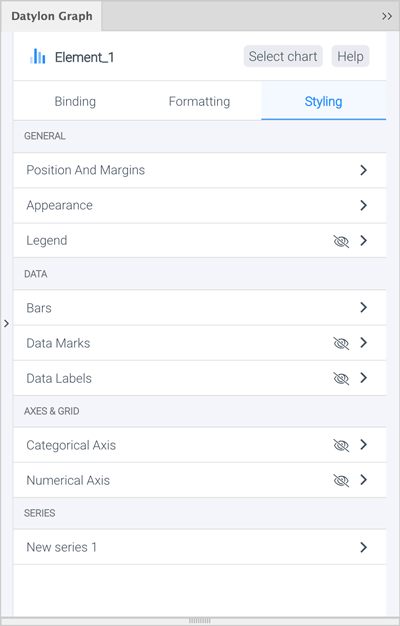 Figure 6. All styling options for a selected Bar chart

This is where Datylon Graph can become overwhelming as so many things can be turned on or off and customized. Within each of the menus shown in Figure 6 is a whole other set of controls, some quite extensive. For example, data labels have a slew of attributes including their position, alignment, offset, rotation, “smart” status (automatic placement), number format, character and paragraph styles, text color, and background settings.

Datylon’s interface for applying fills and strokes was particularly frustrating. Each editable element has its own controls, resulting in a skyscraper-like tower of repeating interface elements for selecting and applying colors:

The inability to use Illustrator’s own Color and Gradient panels was a nuisance. Multiple clicks are necessary to bring up the color picker, and then to select solid color swatches. Illustrator pattern and gradient swatches are not available in the plugin. The plugin’s gradient option provides only two-step linear gradients that have to be set up manually in the panel.

When all the formatting is done and a graph looks perfect, you can to resume editing other non-graph artwork in the document. The graph remains editable with the plugin by double-clicking with either selection tool, and if data needs changing, everything will update properly. Resizing the graph also works well – scaling along one dimension won’t distort the text.

Several advanced features in Datylon graph are tucked away in the styling panel. Among these: Auto-placement options for data labels, with the ability to nudge everything into the exact right spot. The ability to make data bars relative or absolute; An option to make gradient fills “data driven,” mapping the color ramping to the highest value. Another way to use Datylon is by downloading one of their pre-made graphs from their Insights page at https://insights.datylon.com/stories. Using this resource helped me learn new graph types and how they can be applied. You must be signed in to download the graphs. The Insights page includes examples of every one of the 12 available graph types that can be created with Datylon. The downloadable .AI files are editable with the plugin. Here’s an example of an Arrow chart they provide: Figure 9. A Datylon Insights arrow chart (left) with its data and formatting options shown in the plugin panel (right)

It was relatively easy to customize this chart with my own colors, line, and arrow styles, and to make text edits to the title and footnote: Datylon worked reliably most of the time, allowing me to jump in-and-out of graphs for hours, making dozens of edits and tweaks. It never destabilized Illustrator while in use. It did however fail on a few occasions to “reach the mothership” giving me the same error seen in ?Figure 2.

I did encounter some performance issues. Most notably the scrollbars in the panel would occasionally disappear. These are absolutely crucial since some sections of the tool go completely off the screen, even on a 27-inch 5K screen. Toggling the panel on and off seemed to help the problem, but having to do so was an annoyance.

There are also some missing features, that result in less-than perfect results. Among these, there appears to be no way to wrap text. Even moderately long category labels with a space like “Los Angeles” can become squeezed unless they are rotated or resized. Excel handles this situation automatically (?Figure 8). Tech support was available to me while using Datylon Graph during the extended trial. Full disclosure: The team at Datylon was aware that I was writing a review, so we must assume that they were on alert to provide help on demand. They were pleasant, and patiently helped me understand how best to use the tool. They also solved a few mysteries that I could not figure out on my own, such as how to overlay a line on a bar chart. In Excel this is a specific chart type. Datylon handles it by requiring that you plot a separate graph object, and ‘bind’ the relevant column from the existing data sheet . Changes to any part of the data will update properly, as multiple graph objects can be created from a single data source. Creating titles and footnotes for a graph also requires this approach – these text-only elements are separate graph objects (?Figure 9).

I got stuck trying to figure out these seemingly simple tasks due in part to a lack of documentation; Datylon provides non-narrated video tutorials, a Get Started guide .AI file, and select articles at https://help.datylon.com/. There is limited interactive help in the plugin panel, and no full user manual.

Value delivered vs. the cost

At a cost of ~$100 per year, Datylon does deliver great value. It’s a robust graphing application and its speaks Illustrator users’ “language” of fills, strokes, picas and points. The many examples available from Datylon Insights can spark creativity and in some cases give you head start on a graphing project.

Datylon was a tool that grew on me as I used it, even though some features were frustrating. My feelings about Datylon are mixed.

On one hand, there is no other Illustrator graphing tool that comes close to its capabilities. It far surpasses the built-in graphing that Adobe seems not to have updated in years. The price is reasonable.

On the other hand, you cannot use Illustrator’s main tools on a Datylon graph so long as you want to use the plugin for formatting and data changes. The moment you expand a Datylon graph, it becomes a complex set of nested clipping paths. I also was unable to save a Datylon graph as a Graphic Style to make it easy to re-use with other data. The plugin panel is huge and at times confusing. Text won’t wrap, and it won’t format numerical data in ways that Excel easily can.

However, in the end I felt that I could work around these frustrations. Not having to leave the comfort of Illustrator to create advanced graphs was quite nice. Datylon may not be the tool of choice for full-time chartists who occasionally use Illustrator. But if you’re an Illustrator user who also has to create graphs, this tool is worth a look – it could save you from that 800-pound gorilla.

Featuring over 40 expert speakers and 100 sessions and tutorials, CreativePro Week offers five days of in-depth training and inspiration, all in one place. No matter your skill level, you’ll learn techniques and best practices you can start using immediately to improve your productivity.

If you can sign up for only one event in 2022, it should be CreativePro Week.

Members get a special discount on registration! Sign up today.