Out of Gamut: Realizing Good Intentions with Rendering Intents

As tempting as a no-nonsense dismissal of rendering intents might seem — “My intent is simply to get some good-looking output!” — choosing the right rendering intent in Photoshop and other applications is important if you want accurate, predictable color.

Many would-be color-management heroes get caught up in the widespread confusion about rendering intents, and not without good reason: Applications often refer to rendering intents differently, controls aren’t always where you’d expect to find them, and keeping the various intents straight can be a challenge. But making the best choice for any given image isn’t so difficult if you understand what rendering intents are and where they come from.

What Are Rendering Intents?
Rendering intents are simply methods — sets of rules, say — for converting colors from one color space to another. They are a standard part of the ICC (International Color Consortium) profile format used by virtually all current color-management systems, including ColorSync on the Macintosh and ICM on Windows. While they are primarily designed to address the problem of handling out-of-gamut colors, they have an effect on all colors.

Out-of-gamut colors are simply the colors present in the source color space that the destination color space cannot reproduce. For example, the color displayed on a monitor from RGB values of 0,0,255 is not readily reproducible in print, and the color produced in print using 100 percent cyan ink cannot be displayed by most monitors. When we try to create a match between monitor and print, we have to do something with out-of-gamut colors, and that’s precisely where the rendering intent comes into play. The rendering intent being used defines how out-of-gamut colors are mapped (or not) to colors that exist in the destination color space. First, our eyes are highly adaptable to different lighting conditions, and one of the many tricks they play is adapting to different “colors” of white, a phenomenon known as chromatic adaptation. When we judge color, our eyes seek out white, then judge other colors in relation to that white. Our eyes accept a wide range of different colors as white, so the white in the scene we’re evaluating biases our perception of all the other colors (this is one reason why we use standard lighting for proofing, since the color white is greatly influenced by the light source that illuminates it).

Absolute colorimetric rendering tries to reproduce the source white exactly in the target space. If your target space represents a print and there’s a visible paper-white border, an absolute colorimetric print will usually look strange: The white areas in the image will almost always have some color added, but our eye adapts to the paper-white surround, so the image appears to have a color cast. Figure 2: Converted to an inkjet space using absolute colorimetric rendering. Note the discontinuities, particularly in the blue areas, and the apparent color shift on the grayscale.

Relative Colorimetric Rendering
The other three rendering intents all translate the white of the source to the white of the output, and shift all the other colors accordingly. Since we usually judge our output in the context of its native white, we almost always want to use one of these three rendering intents that perform white point conversion, unless we’re proofing as described in the previous paragraph. Perceptual Rendering
Perceptual rendering attempts to compress the gamut of the source space into the gamut of the target space. Exactly how this is accomplished is left to the discretion of the tool used to build the profile, but typically perceptual rendering desaturates all colors to bring the out-of-gamut colors into the target gamut while more or less maintaining the overall relationship between colors. Preserving the relationship between colors helps preserve the overall appearance of images. 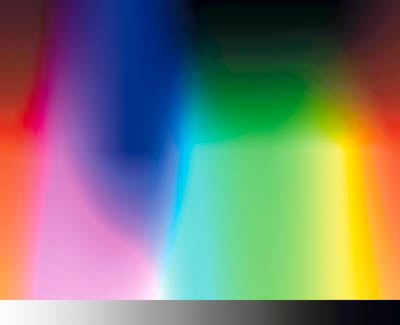 Saturation Rendering
The final rendering intent — saturation rendering — maps the saturated primary colors in the source space to the saturated primary colors in the target space, without bothering about differences in hue, saturation, or lightness. It’s designed for rendering business graphics like pie and bar charts, where we simply want vivid colors and aren’t particularly concerned as to exactly what those colors are. Which Should You Use?
I’m often asked the question “which rendering intent should I use?” The only sensible answer is that you should use the rendering intent that produces the result you like best. But for most seekers of knowledge, that’s not a very helpful answer.

Conventional wisdom has it that one should use perceptual rendering for natural imagery such as scanned photographs or digital camera captures, and relative colorimetric rendering for vector art such as Illustrator or FreeHand files. As a basic rule of thumb, this isn’t a terrible approach, but it doesn’t always yield the best results. Figure 6c: Converted for a Web press space using relative colorimetric rendering. Note the plugged-up detail on the top of the cone of red yarn.

Many photographic images could benefit from a relative colorimetric rendering, rather than a perceptual rendering. Remember, color-management systems know nothing about the content of the image itself; they only know about the gamut of the color space the image inhabits. When you use perceptual rendering, the color management system applies the same gamut compression to all images, even when the image contains no visually or aesthetically significant out-of-gamut colors. For instance, with pastel images, perceptual rendering will apply unnecessary gamut compression, while relative colorimetric rendering may produce a result that’s more faithful to the original. With vector art, unless you’re trying to reproduce one specific color such as a logo, the same principles apply: If your artwork contains important out-of-gamut colors, relative colorimetric rendering may clip them to the point where they become indistinguishable from an in-gamut color with the same hue. In that case, perceptual rendering would probably produce a better result.

Application Notes
One of the many wonderful new features of Photoshop 6 is that it allows you to see how the different rendering intents will affect your image, as I described in a past column.

Some applications, notably QuarkXPress 4.x, don’t offer any control over rendering intent. In this case, the profile’s default rendering intent gets used. (Almost all output profiles have perceptual rendering set as the default intent.) There’s little you can do about this limitation except to be aware of it, and to manage your color outside XPress wherever possible.

Different Strokes
Choosing the correct rendering intent for the job at hand is one of the essential tasks in making color management work. Look at the relative gamuts of your source and destination: The same image may need different rendering intents for different output process. For example, an image might benefit from perceptual rendering when printed to an inkjet printer, but when the same image is going out to the much larger gamut of a film recorder, relative colorimetric rendering might work much better. If an image doesn’t contain any important strongly saturated colors, you’ll probably get a better result using relative colorimetric rendering than you would using perceptual.

Rendering intents are simply tools. It’s up to you to use them. If you take the trouble to understand what they do and then use them wisely, you’ll produce better color than if you simply accept the default settings of this or that application.