Back in 2014, a technique was demonstrated that would apply a cell style based on a Find/Change setting. The technique was improved upon further by using a script that can be found via this forum, ultimately creating a heat map style table.

However, what if the data changes, or if hundreds of these heat maps have to be made for a book or a variable data print campaign? What if the heat map isn’t always in a table, but in a graphic? That’s where GREP styles can assist with this task.

But for a heat map, the background needs to be colored. Using the same technique, the character style can be changed to apply an underline large enough to fill its future placeholder, and the appropriate tint of the color.

Now, whenever the number 24 is typed, the GREP style activates and transforms the text frame into a colored rectangle.

Here is where most people would stop

But 24 is only one value—a heat map can be used to represent statistics from 1-100, does this mean 99 more GREP styles need to be made? For this technique to work, the answer is yes. It also turns out that 100 is the maximum amount of GREP styles that can appear in a paragraph style.

This is the point where most people would say “too hard” and do the task manually. But if there was a script that would make the 100 GREP styles required for this technique, that would be easier. Well, here it is!

As usual, download and install the script (instructions here). Once the script is installed, run the script while the appropriate InDesign file is open.

If the script is run while a text frame is selected, an additional alert is presented:

And voila, the styles and heat map swatch are all produced.

Another look at the GREP styles of the paragraph style that creates this technique also reveals that the circumflex (^) has been added to the GREP styles. This ensures that only numbers at the start of a line will have the style applied to them. 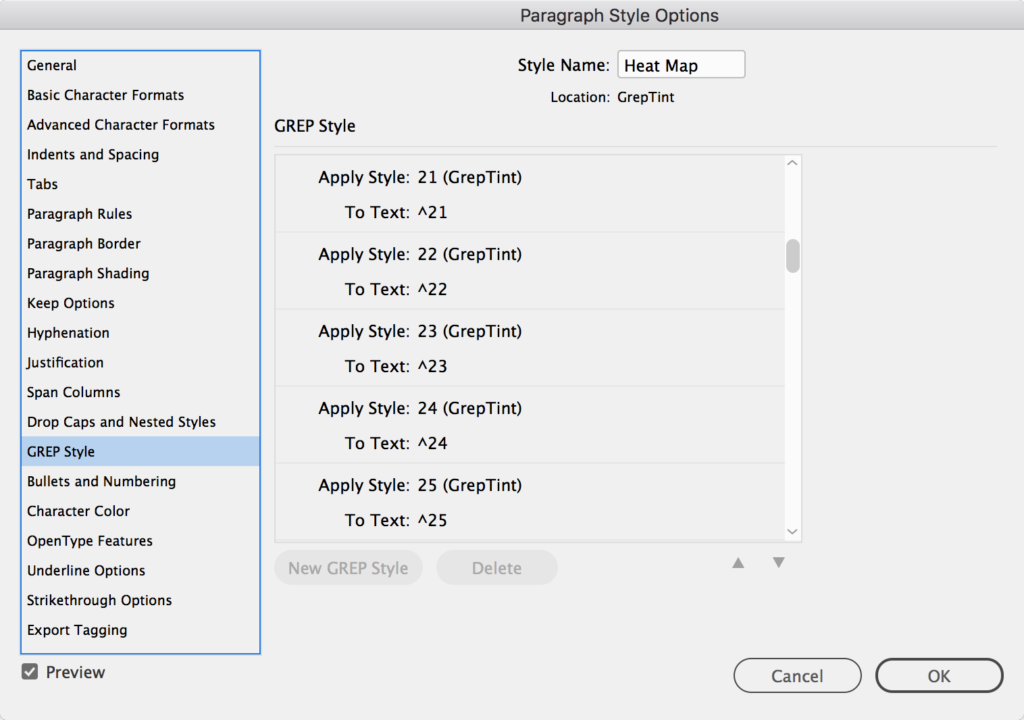 OK, so whenever a whole number between 1-100 is typed, the background changes color to reflect the tint strength of the whole number. But how can this be implemented to make heat maps? The answer is by cutting the text frame that contains the heat map and pasting it into a desired shape that needs to reflect the heatmap value, and this is done using the Paste Into feature from the edit menu (Option+Command+V on a Mac, Control+Alt+V on Windows).

The Heat Map paragraph style may require the font size and underline options to be adjusted to suit each heat map, but here are two applications of the technique:

In this example, a heat map is used to represent unemployment statistics in the European Union. Each country is its own shape drawn in InDesign, and a database that contains the statistics has been added via Data Merge. The script that generates the heat map styles has also been run. As mentioned above, you may need to adjust the styles to suit each heat map.

In this example, the paragraph rule had to be at least the height of the largest graphic, which in this instance is Sweden. Both the size of the font and the underline were then increased accordingly in the Heat Map paragraph style. With the technique in place, it is possible to toggle through the Data Merge preview to see that the color of the countries changes based on the values in the database.

The same technique should work, right? Well, not without some modification.

Applying the Heat Map style directly to text in a cell won’t change the whole cell, only text within the cell, so the initial technique that worked with graphic frames needs to be applied here. The difficulty is that you cannot paste a text frame into a graphic table cell via Paste in Place.

One workaround would be to draw graphic frames where the table cells are, paste the Heat Map text frames in place, and send the graphic frames to back or put them on a lower layer. This technique was used to create the heat map of 60 years of maximum record temperatures in my home town of Adelaide:

While researching this technique, GREP expert Jean-Claude Tremblay provided this solution that would allow the Heat Map style and the value to appear at the same time in a table cell. That is:

I hope that readers find this tip useful and – in addition to the GREP Graphs script that I wrote about earlier, make fluctuating statistics a little easier to prepare, and also open the possibilities for some imaginative Data Merge variable data campaigns.

How to Fill in Empty Table Cells