Bleed is a term that comes into play when you’re designing content intended for print output. Bleed is neither needed, nor desired for output to any format other than print. It refers to situations when design elements on a page are intended to extend all the way to the edge of a piece of paper and is required solely because the printing process as a whole is not perfect and has inherent limitations.

To avoid the inherent limitations of the printing devices that we use (whether it be a press, digital press, copier, or printer), we need to print our jobs that contain bleed on a larger piece of paper and then trim the paper after the fact producing the desired result. Now it’s not enough to simply make sure that our elements extend to the edge of the paper or in the case of the InDesign document, the edge of the page size (trim size), because there’s another limitation that needs to be accounted for. That limitation is the dimensional stability of the paper or substrate that we are printing on. You see paper is incredibly susceptible to dimensional changes from humidity in the air. This means that the paper or substrate can grow or shrink throughout the printing process. So if the ink only extends to the edge of the trim size, dimensional changes in the paper could cause a white edge to be revealed after the product is trimmed. When a job is trimmed, dimensional changes in the paper could result in slivers of white appearing along the edge of a project. A black border has been added around the design for illustration purposes.

So the correct solution is to extend the design elements beyond the trim size to account for dimensional changes in the substrate, resulting in a desirable finished product. This extension of design elements is referred to as bleed.

Programs such as Adobe InDesign and Adobe Illustrator allow you to define the amount of bleed added to a project. Standard bleed size in the printing industry is 1/8″ (.125) but some projects may require more so be sure to ask your printer ahead of time when designing your project. With bleed added to a project, it is possible to account for adjustments in paper or substrate changes during the trimming process producing the desired result.

Adding bleed to a file

In Adobe InDesign, it’s easy to add bleed to a project. In the new document dialog box, simply enter a value for the bleed of the file in the Bleed and Slug section of the dialog box. Or if the file is already created, you can choose File > Document Setup and enter the bleed value there. With the bleed added, you’ll notice a new red guide appear around the outer edge of your document. This guide is a reference point for where your design elements should extend in order to provide sufficient bleed in the printing process. This way, when the project is printed and trimmed, it will appear as expected. 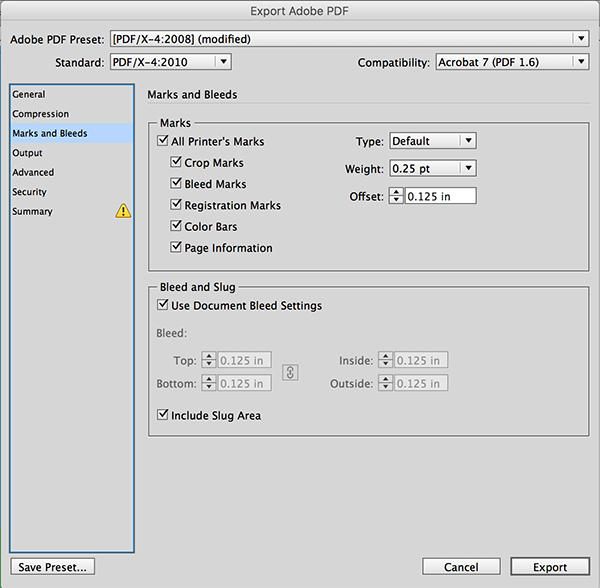 A Final Word on Bleed

Visually, bleed adds a refined and polished look to a project, but it does come at a price. When you create a project that includes bleed, expect the cost of the printed product to be higher than if the project didn’t contain bleed. This is because more paper, ink, and labor is required to produce that product. That being said, the end result is often well worth it!

InDesign How-to Video: Place Multiple Copies of a Layout on One Page

Chad Chelius
Chad Chelius is a trainer, author, consultant, and speaker residing in the Philadelphia area. He’s been using Adobe products for over 25 years and began his career in the design and publishing industry. As an Adobe Certified Instructor and a consultant, he teaches and advises on all Adobe print and web products, specializing in InDesign and InCopy workflows, Illustrator, and PDF accessibility using Adobe Acrobat. He works with clients both large and small, in and outside the United States, helping them to solve problems, work smarter, and more efficiently using Adobe products.