How to install scripts in InDesign

We all love the power of using scripts, but before you can use them, you have to install scripts in InDesign. Here’s how.

Download the script onto your computer and if necessary, unzip it. You should end up with a plain text file with a special filename extension:

If you need to change a setting inside of a script, you can edit it in a text editor. Be sure to save the file as a plain text file with the original extension.

There are two places you can install scripts in InDesign: The application folder and the user script folder. The easiest way to find these folders is to open the Scripts panel in InDesign (Window > Utilities > Scripts), then right-click on either Application or User. We tend to use “User” for scripts that we’ve downloaded—”Application” makes the script available to all users on the computer—but it’s up to you and the permissions you have on your computer. From the context menu, choose Reveal in Finder (or Reveal in Windows Explorer). 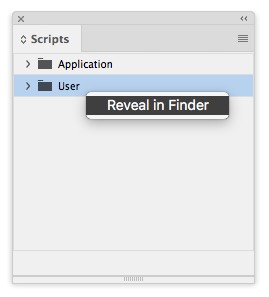 Inside the folder that opens there is a folder called Scripts Panel. Put your scripts inside that.

Any script inside the Scripts Panel folder will show up immediately in InDesign. No need to restart the program.

How to Run Scripts from the InDesign Scripts Panel

To run the script, open a document in InDesign, then open the Scripts panel (see above) and double-click the script name. Some scripts require you make a selection first before you run them, because they act on the selection. See if the script writer provided any sort of documentation if you can’t figure it out.

When the Script is Nothing But Text

If you’ve downloaded or clicked on a script and you just see a bunch of text, you’ll need to get it into a format for you to install. Click here  to read how to do just that.

Working with Old Versions of InDesign or Older Scripts

If you’re still using CS or CS2, follow this info: To install the script, locate the Adobe InDesign program on your computer and drag and drop the script file into the Adobe InDesign CS2 > Presets > Scripts folder. If you don’t see a folder called Scripts inside of Presets, you can make one yourself.

Note that you may need to have an admin account on your computer in order to add plug-ins and scripts to InDesign … but once they’re in there, any type of user account can use them.

If you are having trouble running older scripts in a newer version of InDesign, read this post.

Pasting Table Content Where You Want it in InDesign