I’ve been known to fall down the rabbit hole of Kickstarter projects, and this past week I chased many a white rabbit. This time, however, I climbed back out not with a strange feeling from drinking out of bottles labeled “DRINK ME,” but with a rare gem. I stumbled upon the Hermann Zapf Sketchbook Project. Zapf—master calligrapher and creator of renowned typefaces such as Palatino, Optima, and Zapfino—is directly involved in this project to reproduce some of his sketchbooks, which include examples of his calligraphic skill, pencil sketches, and watercolor paintings. To maintain his skills as a budding graphic artist, Zapf faithfully kept a sketchbook with him during his time with the German army during World War II. This project is a complete reproduction of the three sketchbooks produced during that time. 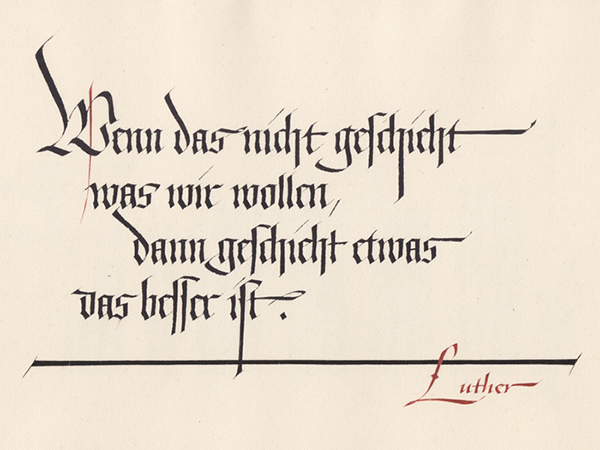 Zapf would not, understandably, let the originals leave his possession, so Akira Kobayashi of Linotype GmBH went to Zapf to make high-resolution scans of the cloth-bound sketchbooks for reproduction. The finished project will be offset-printed at the sketchbooks’ original size of 8.25 x 6 inches on archival paper, with a sewn binding, and cloth-bound to keep the feel of the originals. The 160-page book will feature artwork on the right-hand pages only, but both sides with be printed in full-color to maintain the appearance of the original paper. Jerry Kelly of Kelly-Winterton Press—which produced Zapf’s Poetry Through Typography—has designed the sketchbook project, and provides its introduction. The Kickstarter-backed project will also offer a Deluxe Facsimile Edition, which will reproduce the sketchbooks in three separate volumes like the originals, feature ribbon closures, be signed by Jerry Kelly, and be packaged in a slipcase. The Kickstarter project has been fully-funded with three weeks still remaining for additional fundraising. Even for a type Neanderthal like myself, the beauty of Zapf’s calligraphy and the amount of time, talent, and patience involved, continues to amaze and astound me. I think the sketchbook project—with the added knowledge that Zapf, himself, was directly involved with it—will be a wonderful addition to any graphic designer’s library. In fact, I’m literally banking on it, since I ended up backing the project! I should probably curtail my rabbit-chasing endeavors for a while.

Stormdeck: Inspiration for Graphic Designers in a Deck of Cards