Helvetica vs. Arial: Do You Know the Difference? The differences in the cap R make it one of the easiest ways to tell Helvetica (in white) from Arial (in pink), particularly the design of the leg of the R.

Helvetica and Arial are the names of two typefaces known to just about every designer, as well as many non-professional computer users. They can be seen in print, the web, and other digital media, such as movie titles, eBooks, apps, and the like. While they might seem similar at a glance, they are most definitely different in history, design, and intended usage. While many designers have strong opinions about one or the other, most would be hard pressed to tell you exactly what the differences between them are. Here is the story!

Helvetica is the older of the two, with its beginnings in print. It was originally designed by Swiss typeface designer Max Miedinger in 1957 for the Haas Type Foundry in Switzerland. It was commissioned by managing director Eduard Hoffmann to be a neutral, legible sans serif typeface intended to compete with other popular sans serifs of the day, specifically Akzidenz Grotesk. This new design was subsequently named Neue Haas Grotesk (New Haas Sans Serif) to reflect its origin.

When Haas became part of the Linotype group of companies, the name Neue Haas Grotesk was changed to Helvetica (an adaptation of “Helvetia,” the Latin name for Switzerland) by the Stempel Type Foundry, the parent company of Haas, to reflect its Swiss heritage. More weights and versions were added, after which the renamed and newly expanded family was heavily promoted.

The popularity of Helvetica soared when it was selected for inclusion in the core fonts for the Apple operating system and laser printers, alongside Times Roman and Courier. This was the beginning of the desktop publishing revolution which changed everything related to typography and design. Helvetica has since gone on to become one of the most well-known and widely used typefaces in the world. Both the major and minor differences between the two typefaces are pointed out in the next three illustrations. 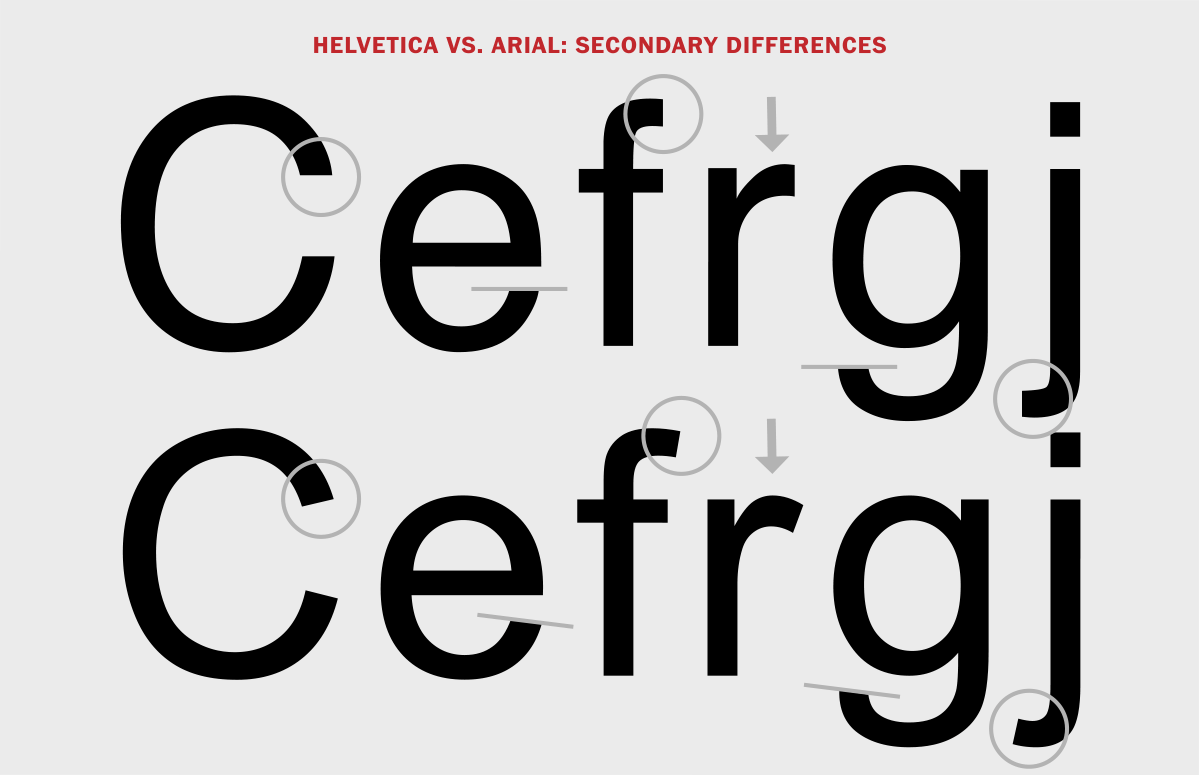 Arial has quite a different history. Around the same time that Adobe was developing PostScript, Monotype won the contract to provide fonts for IBM’s first big laser-xerographic printers. This led to the design of Arial by Robin Nicholas and Patricia Saunders for Monotype Typography in 1982. Several years later, Arial was licensed to Microsoft and was subsequently supplied with all versions of the Windows operating system, which led to its increased usage and popularity, most noticeably on the web.

One of the goals of Arial was to compete with Helvetica, but to be its own design with unique details more suitable to the lower resolution technology of that time, including the IBM laser printer. It roots lie in Monotype Grotesque, a typeface drawn in 1926. Jumping ahead ten years to 1992, Microsoft licensed Arial to be included in the suite of fonts supplied with the Windows operating system. The Arial family has since been expanded beyond the original weights to include 28 weights and versions. 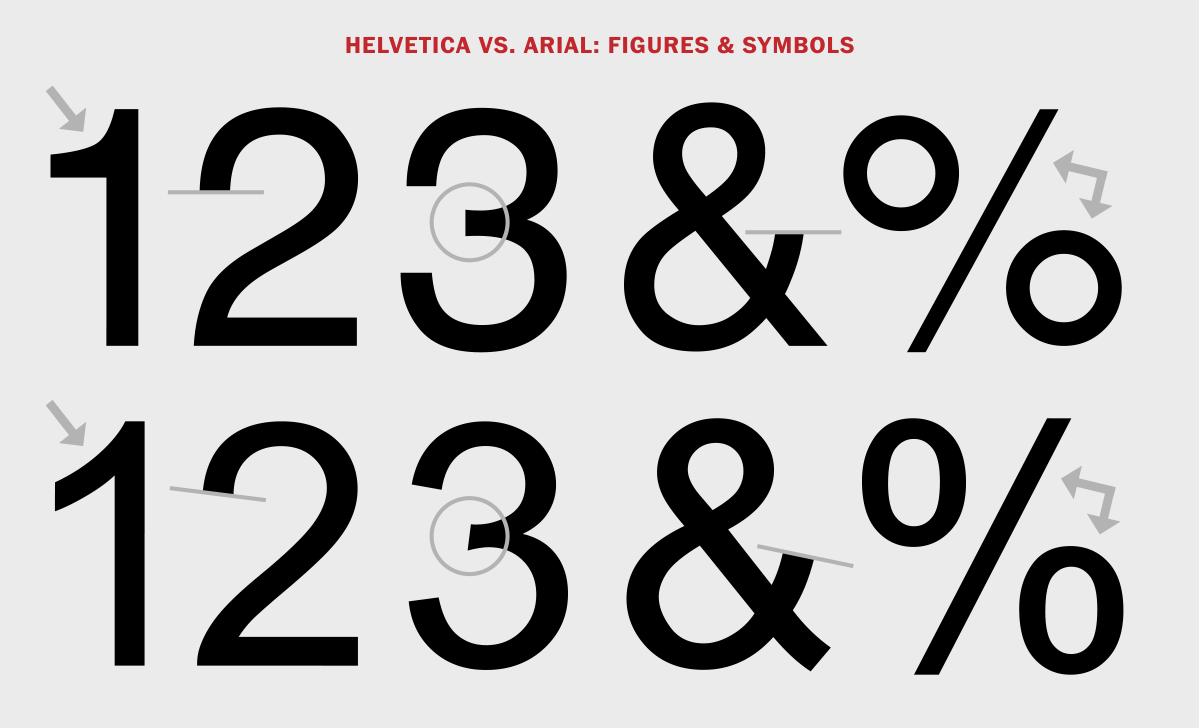 Although Helvetica and Arial might appear to be similar, they have definite differences, many of which were designed to make each typeface suitable for its intended usage. Helvetica was designed for traditional print, while Arial was designed for laser printers and then adapted for use on computers, both being lower resolution environments than professional print work. This led to some subtle (and not so subtle) design changes.

Helvetica is a sharper, crisper design with more stylish details and a slightly more rectangular (or, less rounded) appearance. These traits can be seen in the leg of the cap R, the curved diagonal on the numeral 2, more accentuated stroke endings, and blunt horizontal or vertical end strokes on many characters.

Arial is the more rounded of the two designs, with softer, fuller curves, and more open counters. It has an overall less elegant, blander appearance that reproduces well in lower resolutions environments. It also has a diagonal terminal on the t as well as the numeral 1, and a curved tail on the cap Q. The differences between Helvetica and Arial are much more noticeable in larger sizes, while they look fairly similar in smaller text.

Although both Helvetica and Arial are still extremely popular, Arial tops Helvetica in usage and visibility due to its widespread availability on computers using Windows, with over a billion of them! But Helvetica still rules among graphic designers, with its universal, and almost timeless appeal, multiple weights and versions, as well as the rerelease of Linotype’s reworked, and very popular Neue Helvetica typeface (to come in a future article).