But one thing Data Merge cannot do in InDesign is flow objects (or groups of objects) into a single story! That is why it has never been particularly good for directories. Loic Aigon created a script a while back that helped get around the limitation by combining Data Merge and tables — so that you could get a single “flowing story” with one long table.

Now Loic is back with something that is perhaps even more cool: A free script that lets you use Data Merge to flow inline, or anchored, objects!

This is much harder to explain than to show, so? here’s the original template: 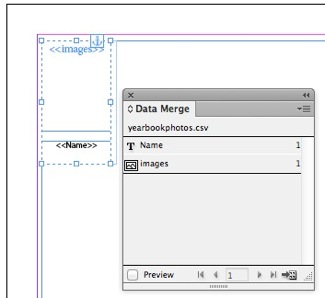 Notice that this is two objects — a graphic frame and a text frame — grouped together, then anchored into a large text frame. The frames have been tagged with the Data Merge panel so that the image goes in the top and the name in the bottom. (We have lots of other tutorials here on how to load the data file and tag objects with Data Merge.)

I have installed Loic’s script, called InlineMerge.jsxbin (I’ll tell you where to get it in a minute), as well as lots of other fun scripts in my Scripts panel: Now all I need to do is select the larger text frame (the one that contains the inline objects) and double-click the script. The script merges the data into the frames on the page, repeating the inline object inside the story in order to import all the data: The reason this is so cool is that you can quickly and easily reflow the data! You could delete one of the people on this page and everyone would reflow. Or you could resize the frame, or put an object on the page that has text wrap, and it all reflows: That, in a word is AWESOME. This is how Data Merge should work now! (Adobe, take note!)

Ultimately, as I’ve said before, you’ll get far more control if you use a third-party plug-in such as InData, but if Data Merge does what you need, then make the most of it!

How to Quickly Place Many Images into Your InDesign Document

Swap Names Around with GREP and Find/Change