Adobe has gone back and added a new feature to CS6: The ability to open newer CC, CC 2013, and CC 2014 files without having to resort to exporting as IDML first.

Now, I need to be clear here: This is not all versions of CS6… this only works with CS6 if you have a subscription to Adobe Creative Cloud, and your CS6 was installed via the CC app! I’m sure many CS6 users are going to grumble about this. For the record, I hope that Adobe will, in the future, make this available to all CS6 users, even without the CC subscription. But for now: CC only.

Anyway, the new version of CS6 showed up in the Creative Cloud app today, and you can update it there: 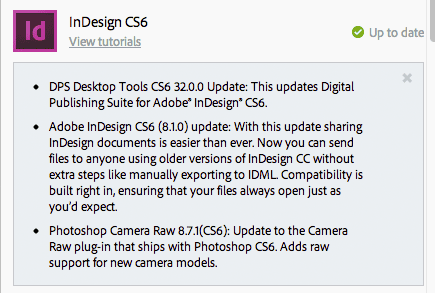 After you update it, you can choose About InDesign (from the InDesign menu on the Mac, or the Help menu in Windows) and you’ll see that it was updated to version 8.1:

There are a number of bug fixes in CS6 8.1, and you can read about them in Adobe’s release notes here.

But as I said, the big new feature is the ability to open newer CC files. It’s incredibly easy: You just… open them!

As soon as InDesign sees that it is a newer version, it asks if you want to convert it: When you click the Convert button, it whirrs away…

The bigger the file, the longer it takes, but I opened a 6 page document with mostly text in less than a minute. I should point out that this only works when you have an internet connection. InDesign is actually uploading your file to the Cloud, converting it on some server somewhere, and then downloading what I assume is an IDML file that CS6 can open.

When that’s done, InDesign asks if you want to save it (that’s optional), and you’re done.

Of course, if you have used features that only show up in the newer versions, then those could be stripped out in the CS6 version of the file. But that’s to be expected, and is how it has always worked with the old IDML-export method.

So now, if you’re stuck in a CS6 world, you can work with CC InDesign files with much less hassle. Awesome!

[Editor’s note: Apparently there were bugs in the 8.1 release for Windows, so it was pulled. A reliable source says it should be up by early next week. Mac users are unaffected.]