It is a magical time in Chicago right now. The frozen streets are crowded with strange creatures, and over at McCormick Place the barricades are overflowing and the parking lots have become epic mazes of adventure, challenges, and heartbreak.

That’s right: it’s almost C2E2 weekend! Each year the Chicago Comic and Entertainment Expo invades the city with a long weekend of fun and fandoms. And in the middle of it all you’ll find a unique superhero serving up “a double raygun blast of tropical fruit and fresh citrus shining through a smooth, hazy body.” 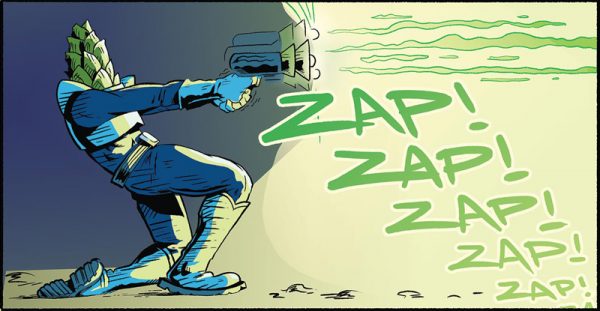 Let’s back up a bit… My name is Melissa and I’m an artist living in Chicago with my husband and fellow illustrator, Max. Together, we do freelance work for Revolution Brewing. This local brewery creates amazing seasonal IPAs, including Galaxy-Hero: the Official Beer of C2E2! Fresh, local, craft beer on draft at a comic convention…what a time to be alive.

For the past few years Max and I have been creating a comic book about this hop-headed hero. The comic debuts at C2E2 and pairs with this annual IPA. It’s an interesting and challenging assignment not only because it’s a story told in single-installments once a year, but also because it’s about characters from a specific brand. The printed comic is for marketing purposes, but the comic story and art are not an advertisement. There’s a balance there that has always been very important to us as creators. It’s not a story about beer at all. Our writer is David Schneider, a friend and very funny fella. He’s written some things that Max worked on before: short comic strips and another book called Mystery Afoot, which was put out by LowCarbComedy. When Revolution asked us if we knew anyone who could handle the script I immediately thought of Dave and his oddball humor. With Dave guiding our beer-fueled spaceship through the years, Galaxy-Hero has developed a distinct style and atmosphere. The first issue was written in 2015 when there were only two Revolution “Hero” characters to work with. So, Dave made up some sidekicks for Galaxy-Hero. That’s how we wound up with a Walrus Man and a six-foot-tall millipede.

As the years went on, Revolution’s Hero Series expanded and we now have a full cast of hop-headed pals for Galaxy-Hero to bum around the cosmos with. We also have a little more direction and story, as it became clearer each year that this was a project worth continuing. This week we’re celebrating the printing of the fifth issue, and I’m happy to share the detailed process of how we go from concept and can art to a printed comic.

Each issue starts with the script. Dave will usually start writing around the middle of the summer, and we’ll do some planning and reviews with the folks at Revolution. As I mentioned, it’s not a story about beer. We’ve been honored with creative control of the characters and story and Dave really lets his imagination fly on each issue. It gets weird. Once the script is approved, we get to work. Dave sends us the script broken into pages, but not panels. Max and I print out a copy of the script and then separately thumbnail the whole thing. We do this away from each other to see what the other person comes up with without any influence. Once we have all our thumbnails together we meet and go through them. This is when we select what scenes we want and split the page drawing 50/50. This always easy since we know each other’s strengths and the things we each get excited about drawing.

Rough thumbnails are turned into detailed thumbnails, reference sketches, and character designs. From there, it’s on to the Bristol board! Generally we rough things in using non-photo blue and then do tight pencils over that with an HB mechanical. Sometimes I leave my blue pencil drawings as they are, sometimes I do very tight pencils that don’t even get inked. Each page is unique, so the time needed for each one varies a lot. Some pages are totally drawn by either Max or me, and some are a mix of panels or characters we’ve both worked on. The drawing phase is definitely the most collaborative part of the process, and some of the most fun we have. Keep an eye out for Part Two of this story, where everything gets digital…

Melissa Sue Stanley and Max Bare are illustrators, designers, and comic creators in Chicago, IL. You can learn more about their work at melissasuestanley.com and maxbareart.com.